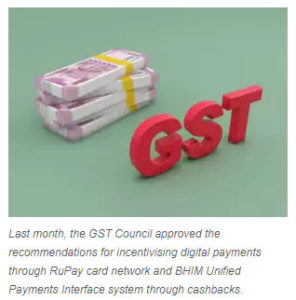 NEW DELHI: The government is working on a proposal whereby citizens could avail of the proposed 20% cashback on goods and services tax on payments made through RuPay cards and BHIM app if they make the transactions using QR codes.

The idea is to automatically capture all transaction details including GST rate and the cashback accordingly, a senior government official told ET.

For those who are not comfortable scanning QR codes for digital transactions, the alternative will be to compile all the receipts and then claim GST refund from the government in the same way as income-tax returns and refunds are filed, the official said.

Once implemented, customers making payments using RuPay card or BHIM app will get a cashback of 20% of the total GST amount, subject to a maximum of Rs 100. There has been a series of discussions between the ministry of electronics, National Payments Corporation of India (NPCI), GST Council and Goods and Services Tax Network on how to offer this cashback to consumers, the government official said.

“The option to use QR codes is an evolved solution but also a best bet, since it will capture all the details which is not possible in other modes,” the person said. The plan includes working out an average rate of tax for different categories of products since it varies greatly in some cases such as hotel bills.

“The proposal needs further refinement from NPCI,” the official said. The finance ministry will give it final go-ahead.

NPCI said the initiative is at the proposal stage and GST Council is working to draft the scheme and its modalities. “We would be in position to share further details if the proposed cashback scheme is implemented and operationalised,” the corporation said in a statement to ET.